Are There Genies At North Pole City?

North Pole City is home to a genuine Genie’s lamp and bottle. Traditionally, lamps are for males and bottles for females. This holds true for the ones in Santa Claus’s possession. Not only are these magical vessels supernaturally sealed to hold Genie’s but Santa has also created a secure spelled vault to keep them in. However, a viewing window allows anyone to see these ancient receptacles laden with gold, silver, and various precious gems! The two Genies receptacles are located in the Genie Gallery within the North Pole City Museum. There you can also learn about the history of Genies who are actually caged Jinn. A higher dimensional race of dangerously mischievous beings. In ancient times the concept of trapping Genies in bottles and lamps with magic came into being. The Genies are compelled by the container’s magic to make wishes.

The Purpose Of Genie Wishes

The main purpose of Genies wishes is to release the build-up metaphysical energy that these supernatural beings exude. Without wish-granting the bottle or lamp would become a ticking time bomb greater than any nuke ever seen on Earth! Thankfully, this wishing deadline is every 1000 years or so. Just to be safe Santa rubs the bottle and lamp every 100 years or so to make a total of six wishes. They are very mundane wishes that most would consider a waste. Genies are tricky and they love twisting wishes to torment humans. Only a powerful enchanted entity like Santa can safely make the wishes. He keeps them simple to not only prevent misunderstandings but also to take as a little part as he can in the dark magic of the Genie. Unfortunately, any wishes that could make the world a better place only transport the wisher to a Parallel Universe where that’s the case! So Santa can’t wish for peace on Earth for us all!🎅

Santa Claus And The Genie’s Lamp

An evil male Jinn phased into our reality with great power in the 16th century. This is quite rare but when it happens Jinn Trappers work to get these pesky paranormal beings into special ancient lamps and bottles. It’s quite difficult to make new ones as ancient magicians did. The world of magic was far more powerful back then. Mainly due to Nature Deities being exponentially more powerful as well. Deities magicians called upon for magic. This particular Jinn was attracted to the supernatural surge coming from North Pole City during Christmas. He siphoned energy from everyone including the Spirit Of Christmas. The Jinn also randomly possessed Elves, Reindeer, and other enchanted beings in the holy domain. Holy protections that were targeted for demonic entities rather than Jinn.

Soon North Pole City descended into dark chaos and Santa quickly got to the bottom of this supernatural situation! Even as a Demi-Angel Santa was no match for a fully powered Jinn! Santa tried to call upon Heavenly Angelic forces. Unfortunately, the Archangels decided this should be another trial to prove himself worthy of remaining a Demi-Angel rather than being considered a Nephilim. Santa’s Archangel Father was forbidden from helping him as a grand battle ensued between Angel-Human Hybrid and Jinn! Before this Santa had secretly dispatched a small band of Elves to go find an empty Genie’s lamp somewhere in the Middle East. Imagine a group of little Elves trekking across sunny desert dunes on a camel.

Santa Claus vs The Genie 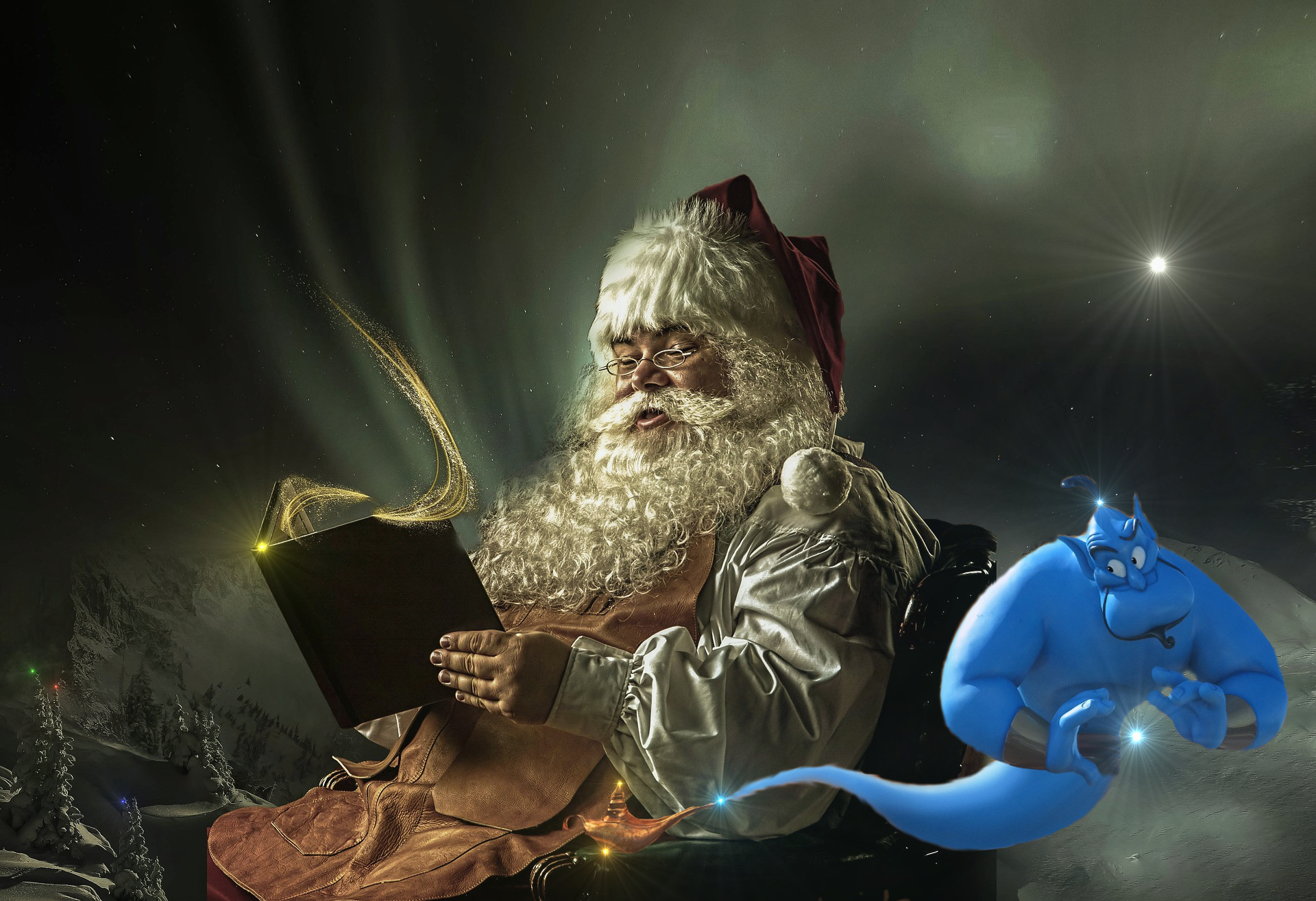 Luckily, Santa wasn’t alone as he had the Winter God Jack Frost already living at the North Pole. Jack called in an army of other Winter Gods, Goddesses, Nymphs, and Fairies! They eventually subdued the Jinn in a temporary magical ice prison until the Elves returned with a lamp. The Jinn’s ultimate goal had been to possess Santa Claus himself and take over Christmas as a Jinn holiday. Then with this additional power conduit, he planned to open a portal to the Jinn dimension to set off a full-on invasion of Earth! With the Jinn’s plans thwarted, Santa consulted ancient texts to recite the proper incantation to eternally trap the Jinn into the lamp thereby making him a Genie. As the original Jinn Trapper of the lamp, Santa shouldn’t be able to ever be the Genies Master and make any wishes. However, his dual nature as both human and angel seems to override that. Jack Frost, and others, wanted to rub the lamp to make three wishes. Santa forbid it and created the additional vault to lock the lamp in!🧞‍♂️

Santa Claus And The Genie’s Bottle

The most recent addition to the Genie’s vault was a bottle Santa found in a home while making his 1984 Christmas deliveries. It was the mansion of a wealthy family whose sole child was somewhat of an ever-growing brat. Santa left him a gift under the tree but it wasn’t quite what he wanted. As a warning, Santa put a chunk of coal in his stocking! As he was about to leave back up the chimney he sensed something dark and diabolical from behind a bookcase. Santa’s four-dimensional vision allowed him to see through it like a full-color x-ray. There he found a vault with a treasure trove of stolen antiquities. What stood out was a genuine Genie’s bottle! Next to it, Santa found an old book about how to make precise wishes a Genie couldn’t twist. It seems their wealth was from a wish. That’s when Santa discovered the family also wished for immortality. The third wish was for unknown powers that suddenly hit Santa like a tornado!🌪️

Saint Nicholas Is Attacked By A Sinister Superhuman

Father Christmas crashed through the wall as the patriarch of the family shot energy beams from his hands while screaming, “You break into my house and steal my stuff! You’ll die!” Santa sprung up and shot his own white snowflake-laden energy beam at the man. He flew through a wall as well! Santa responded, “I strive to give all I can to the world but sometimes stealing is necessary! This genie’s bottle is too dangerous for you or anyone else to possess!” Santa grabbed it and teleported to the roof promptly flying away in his reindeer-powered sleigh. The man angrily levitated out a window after him. He shot powerful energy beams at Santa’s sleigh. A few hit the sleigh as the terrified team of reindeer dodged the rest. Rudolph bellowed, “Jesus Christ this guys crazy!” Santa scolded Rudolph, “Watch your language, Rudolph!” Rudolph said, “Sorry Santa but this flying freak is nuttier than a peanut field!”🦌

Oddly enough the Demi-Demon Anti-Claus had been prepared for his annual ambush of Santa and was annoyed by this flying man. With eyes glowing red and fangs extended the Dark Claus screamed, “Santa’s mine to toy with you silly human!” He shot his own deadly rays at the man as his black sleigh bolted forward pulled by growling hell hounds and a lead Werewolf! The super-powered man was horrified and he retreated immediately while the Anti-Claus cackled with glee! By then Santa was long gone and it made the Dark Claus bellow, “Crap!” He was so angered that he went after the man and destroyed his mansion. Nobody died in the paranormal explosion but the family has been missing since! It’s plausible the Anti-Claus has forced them to join his nefarious legion of doom? 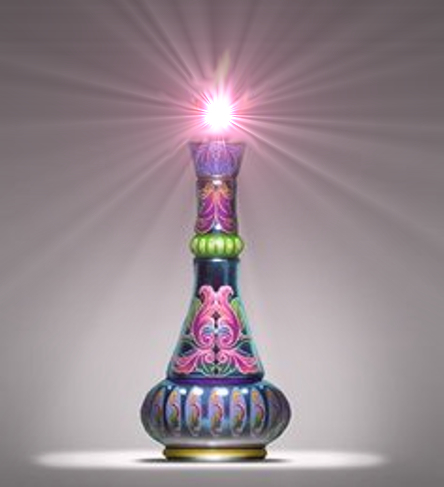 Once back at North Pole City Santa was going to place the bottle in his secure vault with the aforementioned lamp. He didn’t realize the bottle stopper had been loosened in the sky battle earlier. Santa was distracted by Jack Frost storming in all excited by a new Genie in town. Santa accidentally picked the bottle up by the cap and it came off. The bottle fell to the ground and a thick plume of pink smoke filled the room as a beautiful female genie appeared. Santa was shocked as she said, “I grant you three wishes, my beloved master!” Santa rejected the offer but he had to wish or be plagued with her for eternity. Jack egged Santa on to make grand glorious wishes. Santa wanted to get rid of her quickly with no worry of word twisting so he made the following mundane wishes in quick succession to Jack Frost’s dismay…🧞‍♀️

The Genie frowned angrily and then sarcastically said, “Your wishes are my command, Master!” She then flew back in her bottle in a wisp of pink smoke as the stopper hopped itself on sealing the Genie within. At that moment the normally gloomy Jack uncharacteristically laughed heartily for no reason for one solid minute. Afterward, he glared at Santa saying, “You bastard!” He stomped away as Santa chuckled and said, “I forgive you’re language Jack!” He locked the bottle away in the museum vault and went home to have breakfast with Mrs. Claus and his kids.🤶

Christmas In July! What Does Santa Claus Do On The Fourth Of July?

What Does Santa Claus Do On Friday The 13th?