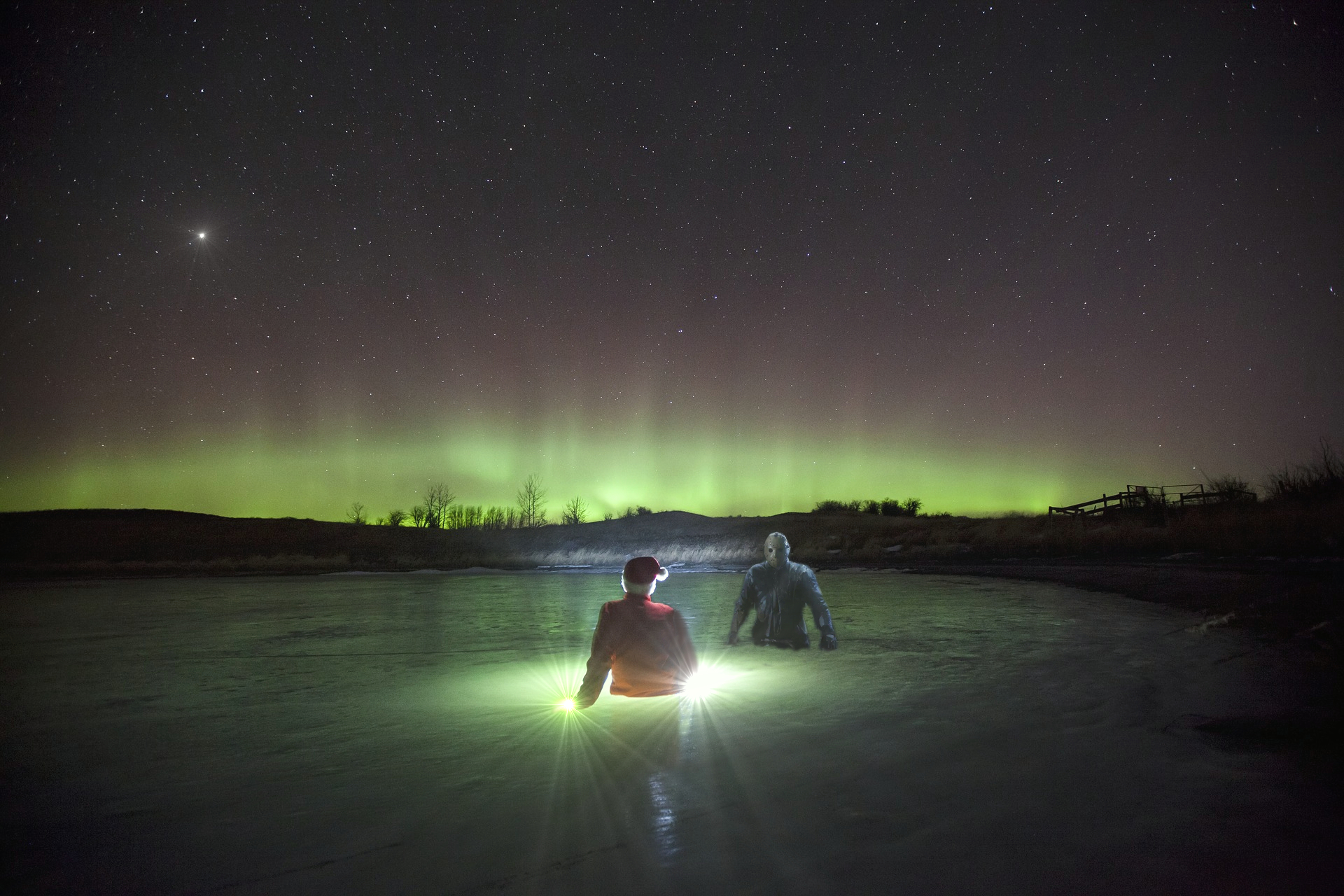 Santa Claus’s battle with Jason Voorhees amid the 1989 Halloween season took place in Ohio. Santa ended up saving a group of teenagers who decided to spend a spooky Friday The 13th night at an abandoned summer camp. Naturally, they thought it was all good fun to invoke the nefarious name of Voorhees thinking he wasn’t real. To their shock they found out he was very real! Jason then went after them with a murderous vengeance! Their shrill screams echoed throughout the cold shadowy woods as they found themselves in a living horror movie!

The first potential victim was about to be slain by a sharp implement as his friends looked on in terror. They tried to intervene but were easily tossed aside by the living dead menace. Frozen in fear they prepared to witness their friends death and flee into the dark forest. At that moment Santa Claus rushed from the brush and punched Jason in the face so hard he flew right through a tree causing splinters to explode from it. He lost his blade in the process! Santa screamed, “Run my children and don’t ever look back!” Indeed they scurried away and made it safety home.

Santa had been in the area dropping off Elves who were scouting locations to hide magical energy reserves and mystical traps. These are essential in dealing with the Anti-Claus and his annual attacks during Santa’s Christmas Eve gift delivery’s. Jason arose and stomped toward Santa with intent to kill! Father Christmas held his hand forth and said, “Jason you still have a shed of child like innocence in you! You were never allowed to grow up!” I can release you from your demonic bonds if you allow me to infuse The Spirit Of Christmas within your dark heart. I would then introduce some of my soul to completely heal you. If you do this then you have my solemn promise that together we will march into the bowels of Hell and free your Mother from demonic bondage! Despite both your crimes against humanity you can be redeemed and find peace in Heaven someday! Take my hand and begin the journey toward your salvation. End this nightmare for all concerned my son!”

Jason had stopped and stood stoic as if truly considering Santa’s plea. He reached out his decayed hand to Saint Nicholas. Santa smiled nodding his head. He grabbed his hand and forcibly pulled the Fatherly Claus close. Santa expected a hug but only got a violent machete plunged into his heart! Jason kept looking at Santa and down at the bloodless entry point of the blade. Saint Nick looked sad and replied, “Oh Jason you disappoint me. Don’t you remember the joy of Christmas and the gifts I gave you before you drowned in Crystal Lake?” Jason tried to sink the blade in further but Santa picked up the confused Voorhees and launched him hundreds of feet into the nearby lake with a super splash!

Santa Claus pulled the machete out and threw it to the ground as a white Angelic light sealed the wound and healed any minor damage to his heart. He then muttered, “Gosh darn Mrs. Claus just mended my suit a few months ago!” while looking at his torn clothing. Santa strolled down to the lake just in time to see the violent Voorhees emerge from the water. As Jason still had a shred of childhood innocence within him he could not harm him. Instead, Santa reluctantly began to recite an incantation that would send Jason to Purgatory where he could begin the rehabilitation process with Ice Demons. A magical spell only a Demi-Angel or beyond powerful witch could utilize.

Jason lie on the waters edge weakened as Santa got half way through the paranormal process. It was at that time over a dozen members of the Voorhees Cult tackled Santa to the ground. The Cult Leader Secilia was a powerful dark witch who quickly recited a spell of her own that teleported Jason to parts unknown. Just as Santa shook off the dozen or so mere humans she focused a purple colored metaphysical energy beam and dark spell at him. He briefly felt some pain and grunted before rapidly recovering and sending forth a beam of holy white light with sparkling snowflakes in it. Within seconds it overcame her power and Secilia collapsed on the ground.

She looked up at Santa with contempt while the cult members circled not sure what to do in the presence of such great power. Secilia then asked, “What manner of magician are you?” Santa replied, “Why I’m Santa Claus of course!” Everyone started laughing while the dark witch said there’s no such thing. Santa countered, “You live in a world of Jason Voorhees, demons, magic, and countless creatures of supernatural origin yet Santa Claus can’t be real?” Secilia replied, “Well if you’re Santa then you should support us. We strive to empower Jason to cleanse the Earth of sinners. The sexual deviants, tormentors of the weak, and those who take their supposedly loving lives selfishly for granted!” Santa retorted, “You are deeply misguided in your warped vision of the world my child. Nobody has a right to pass such depraved death sentences and murder people in cold blood!”

Secilia motioned to her cultists and they scattered into the woods. She sprung forth and disappeared in a dazzling display of shimmering lights after exclaiming, “Until we meet again you meddling old man!” Father Christmas stood in the dark shaking his head. It truly puzzled him as to how so many people could be so easily manipulated and made malevolent. Santa tried to sense Jason’s presence but he was mystically cloaked. In later years it is said the Devil himself aided in this so Santa could not interfere with one of his servants of chaotic horror! So he did what he could. Saint Nick knelt into the water and blessed the entire lake holy. Theoretically, Jason wouldn’t be able to infest the general area for at least 100 years before the blessing wore off!

What Does Santa Claus Do On Friday The 13th?

Friday The 13th: Santa Claus vs The Dark Leprechaun