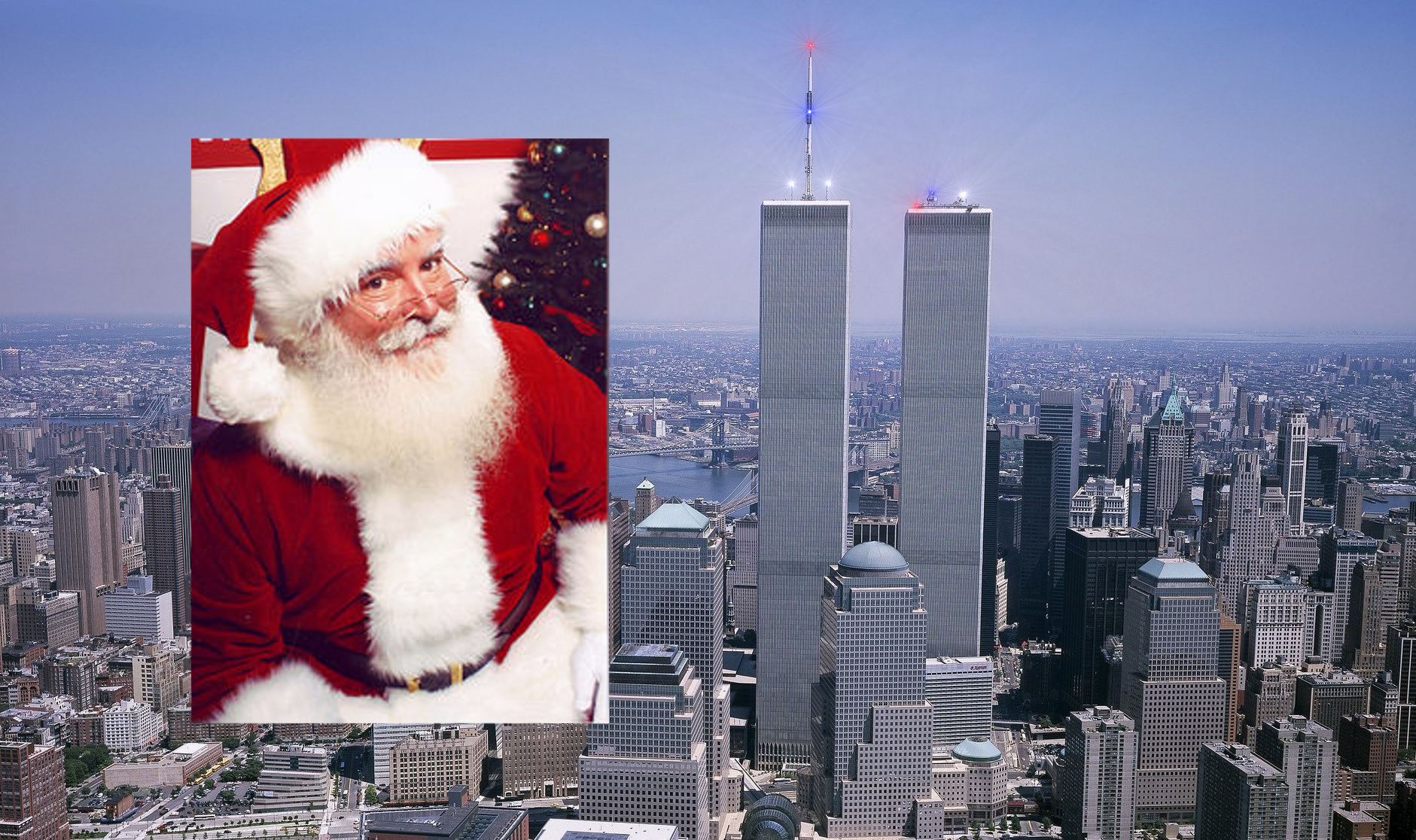 Patriot Day is about remembering those who were tragically killed and injured in the terrorist attacks that destroyed the World Trade Center in New York City. This includes the heroes who died fighting to save the innocent victims of this horrific event. On this day the residents of North Pole City solemnly pay homage to the fallen victims of the September 11th terror attacks. They also give thanks to the brave heroes who are still alive including members of the supernatural world who were there that day. This includes Santa Claus himself!

On September 11th, 2001 Santa Claus was in his office at the North Pole City Capital building when a security elf stepped in. He informed Santa that an airplane hit one of the twin towers. Santa switched on his satellite TV to watch the news coverage as he honed his psychic powers to target the general area. He then had a vision of a second plane hitting. At that point, Santa and the gathered Elves then knew it was a terrorist attack. Santa wanted to power up the sleigh and rush to thwart the second plane along with the one that hit the Pentagon. However, before he could even get out of his seat his Archangel Father Sarandiel whispered in his mind, “No interference in major human affairs, my son!” This was the wish of Heaven and a part of the infamous Supernatural Secrecy Pact signed by an armada of higher dimensional beings.

So Santa contacted various people in order to try and get the second building evacuated. Unfortunately, the calls were ignored for the most part. He then called his Elves out in the field nearby to see if they could help. He also informed various supernatural beings of the light to converge on New York City to aid those in need. In the midst of this, the second plane hit as he predicted. Mrs. Claus stepped in with their kids Nick, Jr., and Mary to witness the tragedy taking place in her home country. Santa immediately took off a glittering white snowflake necklace and gave it to the Cheif Elf Elmer while saying, “You have command!” Elmer placed the necklace around his neck while replying, “I have command, Sir!” Santa then indicated he was going to the twin towers to help. Before Mrs. Claus could object he teleported away to ground zero of the alarming event!

The long-distance teleportation and a magical Glamour to make himself look like a firefighter drained quite a bit of his power. However, Santa still had Demi-Angel strength, speed, senses, and agility. Father Christmas immediately sprung into action and entered the first tower to save lives! He remained within until the building collapsed. Out of the view of prying eyes, he exploded from the rubble and stomped to the second tower to repeat his exercise with the intent of saving everyone he could. He was on the roof as the second tower collapsed with several people he was trying to save. He had no choice but to teleport them away just as the roof left their feet. They made it to a nearby rooftop as Saint Nicholas collapsed from enchanted exhaustion. The people he saved were stunned at suddenly appearing somewhere else as they looked on with shock at the collapsing tower. Meanwhile on the streets nearby a superhero, who would later be known as Patriot Woman, was born from the toxic ashes!

Santa Claus had passed out but quickly regained consciousness as a white light formed around him. His Angel half along with The Spirit Of Christmas began healing and recharging his power. He now appeared in his true glorious form complete with red Santa suit. The people around him couldn’t even speak due to all the surreal events that had just occurred. He then hypnotized them to forget everything and directed them to the stairwell that would lead them off the roof. When they turned around he was gone. He was still powered down and had actually jumped off the roof. Santa barely levitated to the ground within the cloak of toxic black smoke and debris from the collapsed towers. He directed some lost suffocating people to shelter but passed out again briefly amid inhaling tons of the toxic waste. He still wasn’t completely healed and was draining his powers again.

As he awoke a group of three athletic-looking people stood around him. A handsome young man then said, “Santa you’ve done more than enough. We got this you magnificent bastard!” It was a team of paranormal warriors among others who were summoned to the city by Santa, the news, or their own psychic powers. Santa nodded while they helped him stand up. Suddenly four Elves sparkled from the smokey surroundings and teleported Father Christmas back to North Pole City. Within several hours he was back to full steam. He continued to watch the news reports and returned with Elves to aid in finding trapped people. Saint Nicholas ultimately mourned for all his Christmas children who grew up and bravely met their maker on September 11th…🎅

What Does Santa & His Elves Do On Labor Day?